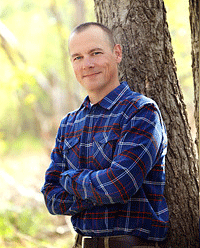 Dr. Andrew Lulloff, a native of Green Bay, is a 1999 graduate of the University of Minnesota with a Doctorate in Dental Science. After practicing general dentistry for 4 years, he made the decision to specialize in root canal therapy.

In 2005, Dr. Lulloff graduated from the Endodontic Program at the University of Southern California. He practiced Endodontics in California for 1.5 years, after which he and his family moved back to Wisconsin. He has been practicing in Green Bay since 2006.

Dr. Lulloff and his wife, Elizabeth, along with their 3 children enjoy staying active outdoors. He has strong family values and traditions, which he demonstrates within in his practice.

Dr. Daniel McHenry received his Doctorate of Dental Surgery from the University of Detroit Mercy School of Dentistry . He spent four years practicing as a general dentist alongside his father in Michigan. He completed a residency in endodontics at the University of Louisville, from which he received a Master's of Science in Dentistry and a Certificate in Endodontics.